So I will be bringing you this interesting podcast called GuyTalk where intelligent young people discuss social issues affecting us all. 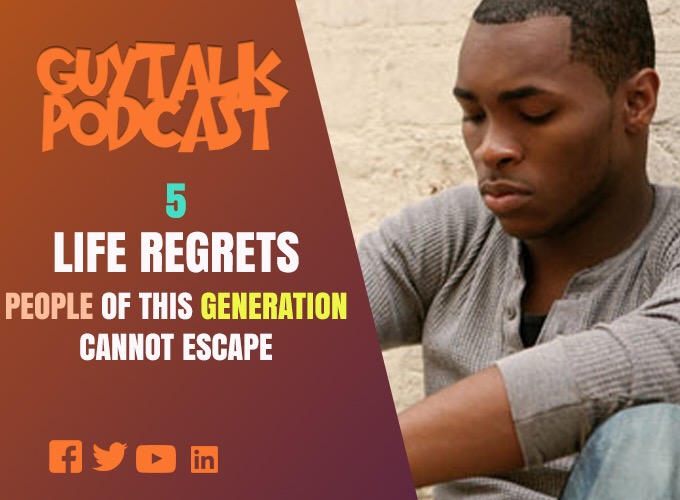 On this episode of GuyTalk, the guys talk about regrets in life and those ones young people of this generation will certainly have if they don’t change… Arrrrrggghhh… Enjoy!

This phrase has been used by some old and foolish people to describe many youngsters of this generation.

This is because this age is so full of distractions these millennials are caught up trying to catch up with trends that they forget to live and take everything for granted.

Many times they only realize this too late and usually cannot correct these regrets in life.

This episode of Guytalk podcast talks about the regrets many people in this generation are going to experience later in life.

Below are some of the regrets.

1. Regret spending so much time on the phones:

A large part of time our lives these days is spent on the phone. This leaves only about an average of 12 hours to for us to stay awake.

Now, this 12 hours is split into activities like work, movement, and chatting.

Sadly, many people give more priority to time they spend on their phones than that which they should spend talking to real people and getting to know those around them.

This time is wasted chasing empty conversations and relationships which lead nowhere, making them trivialize real relationships that might be more beneficial.

Many young people will end up regretting spending so much time on their phone because they will look back later in life and wish they hadn’t gotten carried away with their phones and spent more time investing in themselves and people around them.

2. Regret not keeping in touch with loved ones:

Because there is so much pressure to be successful and slay on social media, many young people forget to keep in touch with friends and family who are not immediately present with them.

Considering the tales of many people who lost a loved one and wished they had more time, this is one regret many will have.

Life is short and very fickle and someone we saw a minute ago might be unavailable the next.

Sadly many young people get caught up in their own life that they forget to check on those they claim to love and end up regretting when they hear those people are dead.

Ego is the bane of many relationships. Many people allow their sense of how they feel they should be addressed, cloud their reasoning and get them to take regrettable actions.

Relationships between lovers get broken up, friends become strangers, and family become mere acquaintances. All because one person feels wronged and thinks they are proving a point by holding a grudge.

Ego also manifests in how people treat their friends, giving rise to classism simply cause one person thinks they make more money than the other. Or one person feels more societally elevated than the other.
Only later in life is the reality of the damage done by ego realized and many times, regrets follow.

See podcast to get remaining two regrets people of this generation can’t escape.